Hey all!
I know it's been way too long... Not sure where to begin.  Well, I guess right now is a good time :)
I have some new news to share with you.  I will be hosting for the production company Moving Pictures Media Group.  This comes at an exciting time for me as I've been looking to get back into hosting.  Guess my days at the Space Channel really did have an impact on me.  I've included the press release for you to have a gander.
Hope all is well with everyone!
Love and Light,
Kim
Media Contact
Moving Pictures Media Group
(310) 845-6512
Info@movingpicturesmg.com 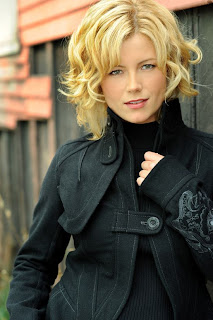 The gorgeous actress and television host, Kim Poirier, has signed on to be the "face" of production company Moving Pictures Media Group.
For Immediate Release: September 20th, 2012
(Hollywood, CA) The independent production company, Moving Pictures Media Group (MPMG) (http://www.movingpicturesmediagroup.com/), proudly announced this week a new addition to the production team. The talented actress Kim Poirier (http://www.kimpoirier.net/) has signed a deal with MPMG to officially act as representation and host for the company as they move forward with their production schedule. MPMG is currently working on a slate of 6 films, a television show and most notably, an apocalyptic zombie thriller franchise titled "100 Days of Death" that includes a feature film, graphic novel, video game as well as a trilogy of books. And now, Kim Poirier, who's known for her exciting role in the popular zombie cult classic, Zack Snyder's "Dawn of the Dead", will join MPMG as the "100 Days of Death" franchise comes into fruition.
"We are thrilled with the addition of Kim Poirier to the MPMG family" said Ray Ellingsen, producer and partner at Moving Pictures Media Group. "Kim is an extraordinarily talented actress as well as a savvy businesswoman. She brings with her a successful career shaped by a resume of powerful work and has proven herself to be an unstoppable force in the entertainment industry. We're proud to be working with her and hope this is the start of a long and successful working relationship."
The stunning blond will be attached to all the projects on the MPMG production schedule. She'll be acting as host and providing viewers with information via a myriad of social media outlets. The starlet has a full career of experience and has gained a loyal fan following due to her roles in feature films, television shows and her several hosting jobs. Kim can be seen in such movies as "Dawn of the Dead", "Awaken", "Decoys", "Silent But Deadly, and "American Psycho II".  Her television credits are extensive and include roles on "Mad Men", "Eureka" and "The Exes" to name a few.  She won the hearts of viewers as Roxy Hunter in three seasons of the Gemini Award winning show "Paradise Falls."
Kim's fans have been following her not only as an actress, but enjoying the star's hosting as she spearheaded the Space Channel for four years with her own hit show "Hypaspace", "Triple Horror Marathon" for Drive in Classics, and the annual "Spacey Awards".   She is also a host, writer and producer for Pop Galaxy (http://www.popgalaxy.com/), an interactive media website that highlights new music, comics and movies as well as original Pop Galaxy content. Now, Kim will be bringing her hosting expertise to MPMG.
"I am excited and honored to be a part of Moving Pictures Media Group" said Kim. "I'm surrounded by a wealth of talent, remarkable individuals and I love all the projects they currently have on their slate. I'm looking forward to working on the zombie film, "100 Days of Death" as they are truly embracing the branding format wherein the project will be expressed in numerous ancillary markets.  I was attracted to MPMG because they are not only a film production company, but also a media company.  They are at the forefront of digital distribution and social media.  Melding this new model along with previous distribution outlets maximizes exposure.  This, along with their diversified slate of films makes me proud to be aligned with such a creative group."
Look for lots more of Kim Poirier as she takes on the job as host for the independent production company Moving Pictures Media Group.
For more on Moving Pictures Media Group, please contact:
Moving Pictures Media Group
(310) 845-6512
info@movingpicturesmg.com
http://www.movingpicturesmediagroup.com/
For more on Kim Poirier, visit the Kim Poirier network:
www.kimpoirier.net
www.facebook.com/KimPoirierPage
www.twitter.com/kimpoirier
#####
About Moving Pictures Media Group:
Moving Picture Media Group ("MPMG"), provides a full suite of services to assist Independent Film Makers, Production Companies, and Investors in the Development, Production, Post-Production, Distribution, and Marketing of their projects. For more, visit http://www.movingpicturesmediagroup.com/.
About Kim Poirier:
Kim Poirer is a Canadian born actress, producer, television host, and singer. She has gained an extensively large and loyal fan base for her myriad of roles in television and feature films. Kim is currently a host for the independent production company Moving Pictures Media Group. For more, visit www.facebook.com/1KimPoirier